September 28, 1878 – On that day the first of these two congregations was organized at a meeting held in the home of the then bachelor, Mr. Jacob Dahlgren. The constitution suggested by the then existing Augustana Synod was adopted, and it was decided to send a request to become affiliated with that Synod. The name Swedish Evangelical Lutheran Congregation Nordahl was chosen.  In 1879 the Nordahl Congregation was accepted by the Augustana Synod. During the year 1880 a small church, 18 feet wide, 26 feet long, and 10 feet high was erected on a 40 acre tract of land previously purchased. It was described as the SW ¼ of the SW ¼ of Section 15, Township of Providence. This is where the Randolph Windingstad farmstead is now located.

There are no records available to tell us the exact date of the organization of the second Lutheran congregation, which is also one of our parent churches, but it was soon after the starting of Nordahl that Rev. P. J. Kjallstrom officiated at the organizational meeting of what was named The Providence Lutheran Congregation. It became affiliated with the then existing Ansgarii Synod.  In 1881 they built their church one mile east and two and a half miles south of the Nordahl church. It was described as the NW ¼ of the SW ¼ Section 35 of Providence Township. This is south of where Reid & Deb Jurgenson live, formerly Donald Sundin farmstead.

The Union of the Providence and Nordahl Congregations occurred in the year 1884. The name of the new congregation is to be “Providence Valley”. (This was a combination of the names of the two congregations as “Dahl” in Swedish means valley). The South (Providence) church should be moved to the new site and used for the church. The north church is to be moved and placed on land and to be remodeled into the parsonage. These buildings where placed on 40 acre tract of land consisting of the NW ¼ of the NW ¼ Section 27, township of Providence, in 1901 a new parsonage was built.

There have been about 16 pastors plus our current pastor who have served the congregations since the beginning in 1878, and 15 who have served as regularly called pastors since the merger in 1884. Two pastors and their wives are buried in the Providence Valley Cemetery. They are Pastor and Mrs. B. F. Bengtson and Pastor and Mrs. N.W. Swenson.  In addition to these there are also four of the Bengtson children buried here and the son of Pastor & Mrs. J. B. Bennett, and the two sons of Dr.  & Mrs. Emil Benzon - Gilbert and Stanley.

After several years of discussion and planning by the Cemetery Committee, the Congregation voted at its 2008 Annual Meeting to establish a Cemetery Association for the preservation and proper maintenances of our cemetery grounds.

In 2013 Providence Valley will celebrate 135 years as a congregation and family in Christ. 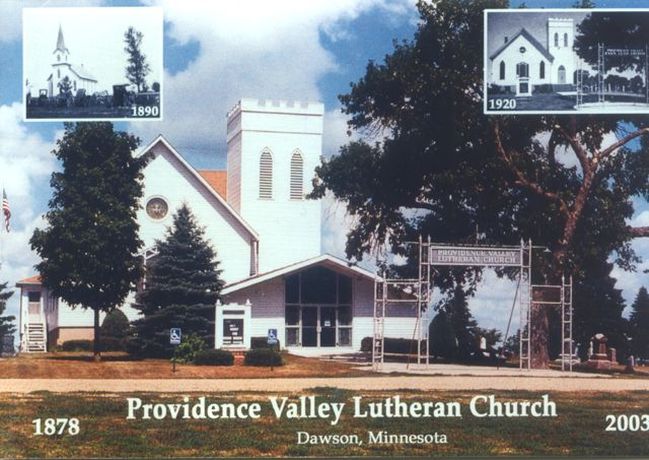